Tofu Chili for Everyone

For the past six months or so Woody and I have been following a mostly vegan diet. Spurred on by our continuing quest to live healthy and long lives, we've decided that cutting out most animal proteins from our diet is a step we feel comfortable doing as part of our efforts. I haven't talked about it much - if at all - because it's still new for us and we're figuring it out. Beyond this, I'm not planning to turn this into a vegan blog or try and convince everyone to make the switch like we are. While I generally hope that people will work to eat healthy diets (most of the time), what works for each of us is different, and likely changes quite a few times over the course of our lives.

How can I live without cheese?
It's true, giving up cheese and Greek yogurt were, by far the hardest things I've had to cut from my (almost daily) routine, but after a while it just wasn't a big deal anymore. To be perfectly frank, when I say we're following a mostly vegan diet that's because we have made a few exceptions and know that when we eat out a few things might have butter, or a little bit of egg (and we did indulge in burgers at Delmonico's when we were in NYC last fall). But generally we're pretty conscious of what we're eating and don't include meat, dairy or eggs when cooking at home.

With all that said, we've been experimenting with different foods lately to get the nutrition we need. With the cold and snowy weekend we've had, a big pot of chili sounded perfect for Sunday dinner. As Woody said when he finished his last bite, it's nearly the perfect meal - pretty cheap, really easy, and healthy (how I make it, anyway). To change it up a little I decided to add some tofu to the mix.

Chili is really all about throwing a bunch of ingredients into a pot and letting in simmer for hours. As far as I'm concerned, it's even better the next day. The basics: lots of onion, garlic, and peppers... 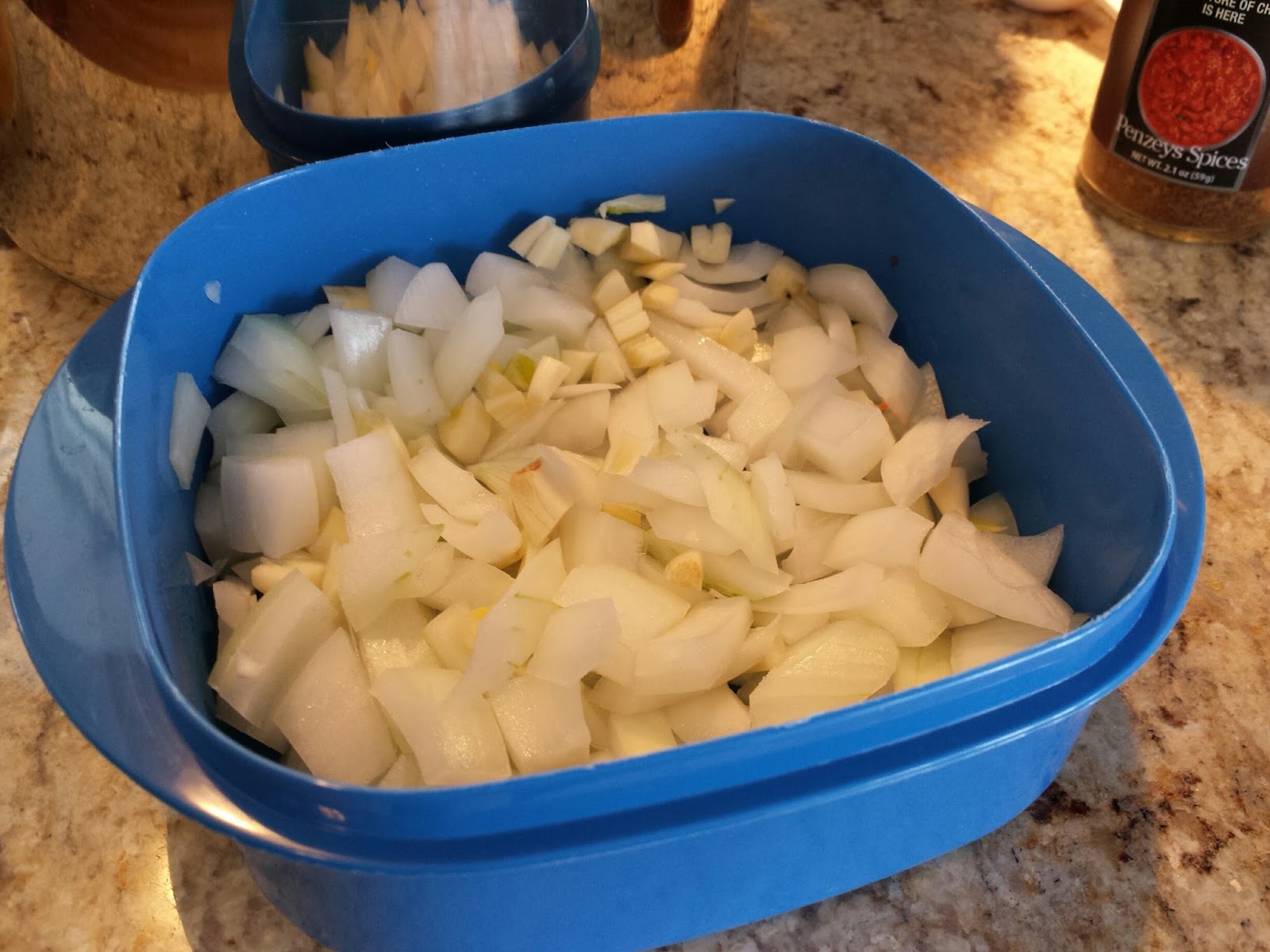 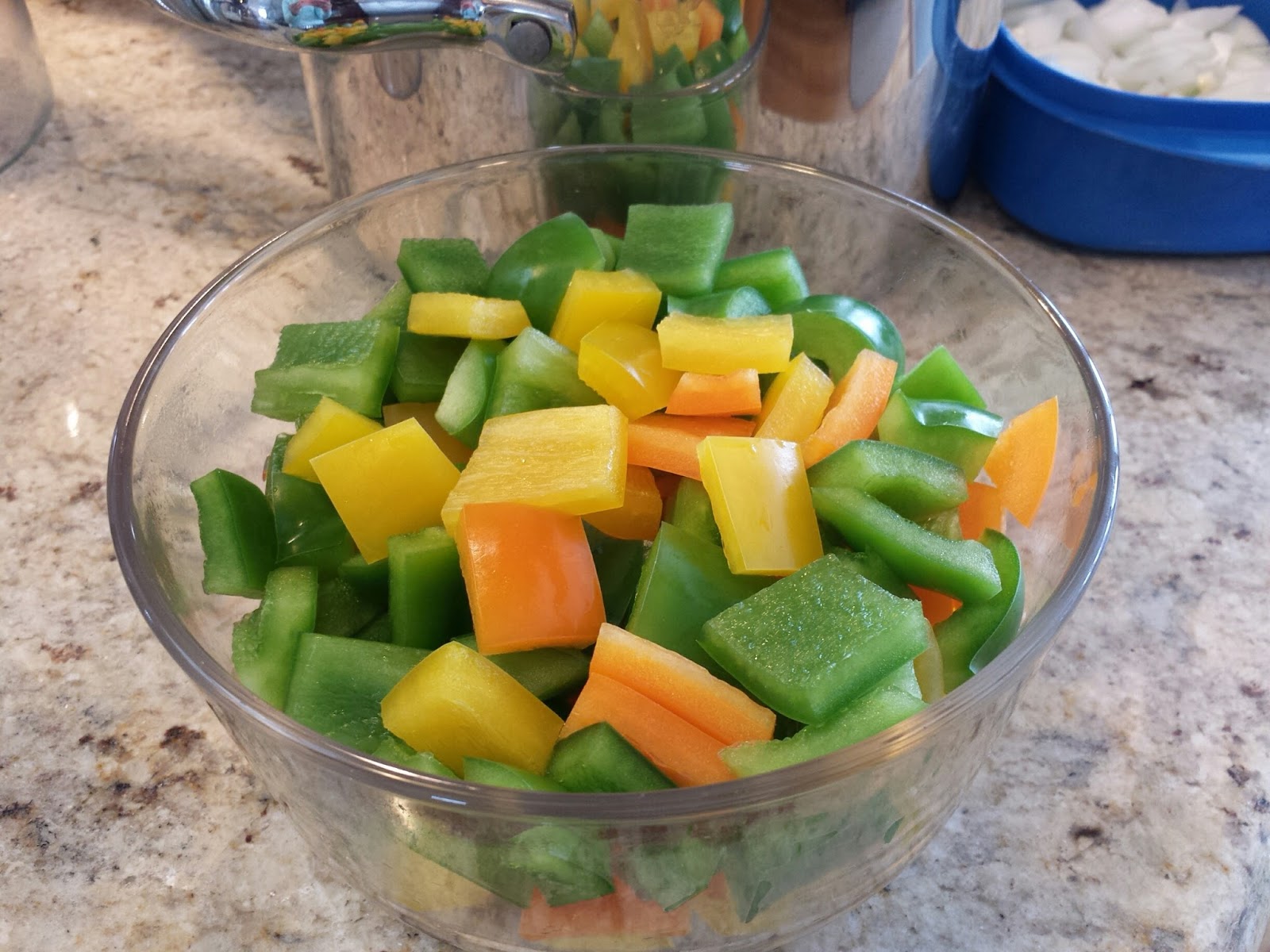 Throw these into a pot with tomatoes (I opt for a mix of no salt added diced tomatoes & fire roasted diced), with a combination of black and kidney beans. 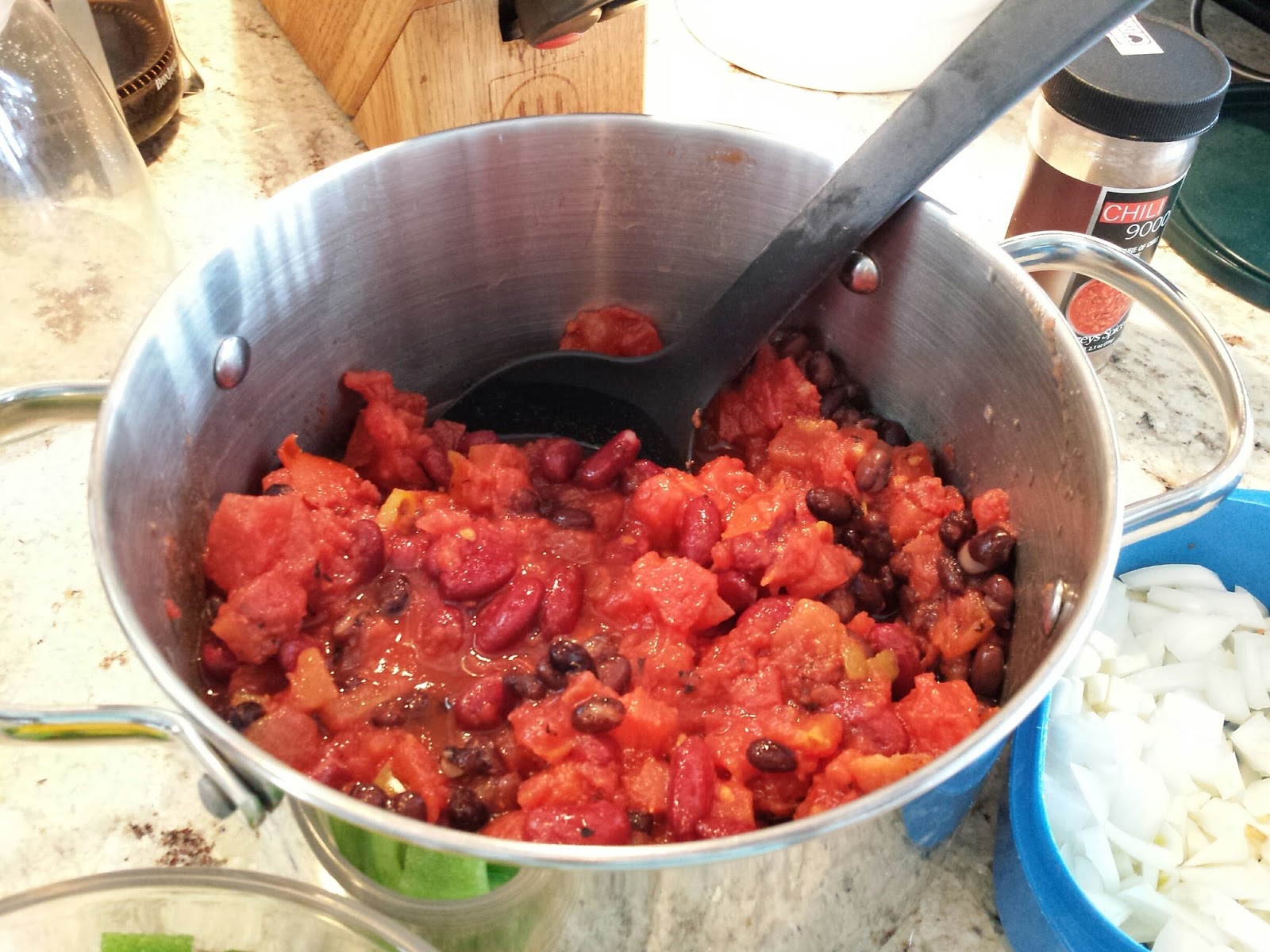 Using firm tofu, I drained then pressed it for about an hour to get a good amount of the liquid out. Then I rubbed in a bit of black pepper and chili season on both sides and baked at 400 degrees for just over an hour - flipping half way through. 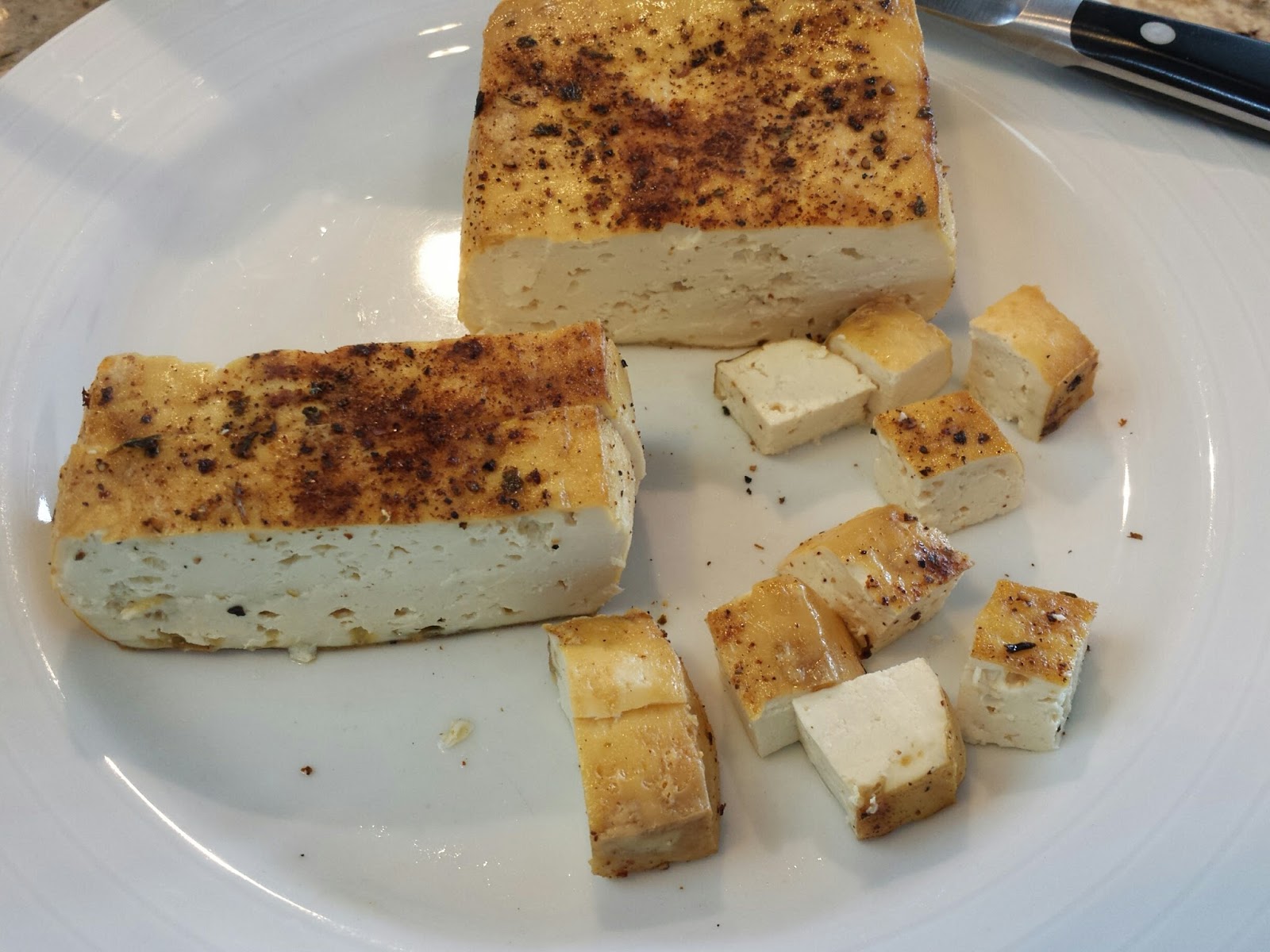 Cut into cubes I added it into the pot, added more chili seasoning and a little bit of ketchup and simmered for several hours. 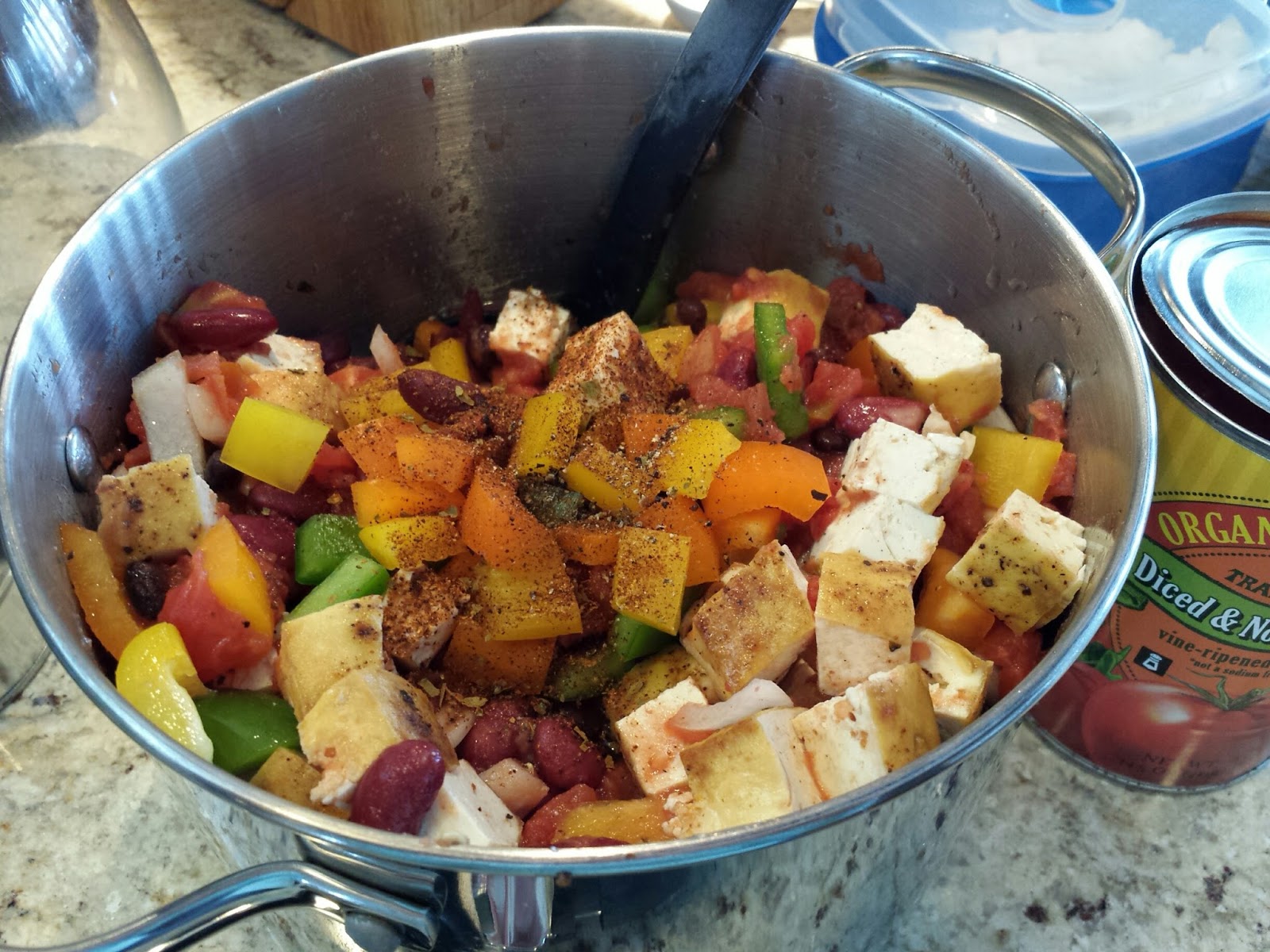 So, all that was:
I don't list quantities because it really depends on how big a pot your using and how many people you want to serve. I often make one pot then add a little more veggies for the second night if it seems like it could use a little bulking up.

The tofu really just added another texture to the chili. As far as I'm concerned, it doesn't have much of a flavor, so it won't overpower the other ingredients, but it does add a lot of protein without many calories. Next time I think I'll try preparing the tofu like a scramble - which should replicate the texture of ground beef.

When Neil Patrick Harris was just about to take the stage for his Oscars monologue (really, he's the perfect host), I dished up the chili and topped it off with a bit of avocado, because let's face it, everything is better with avocado! 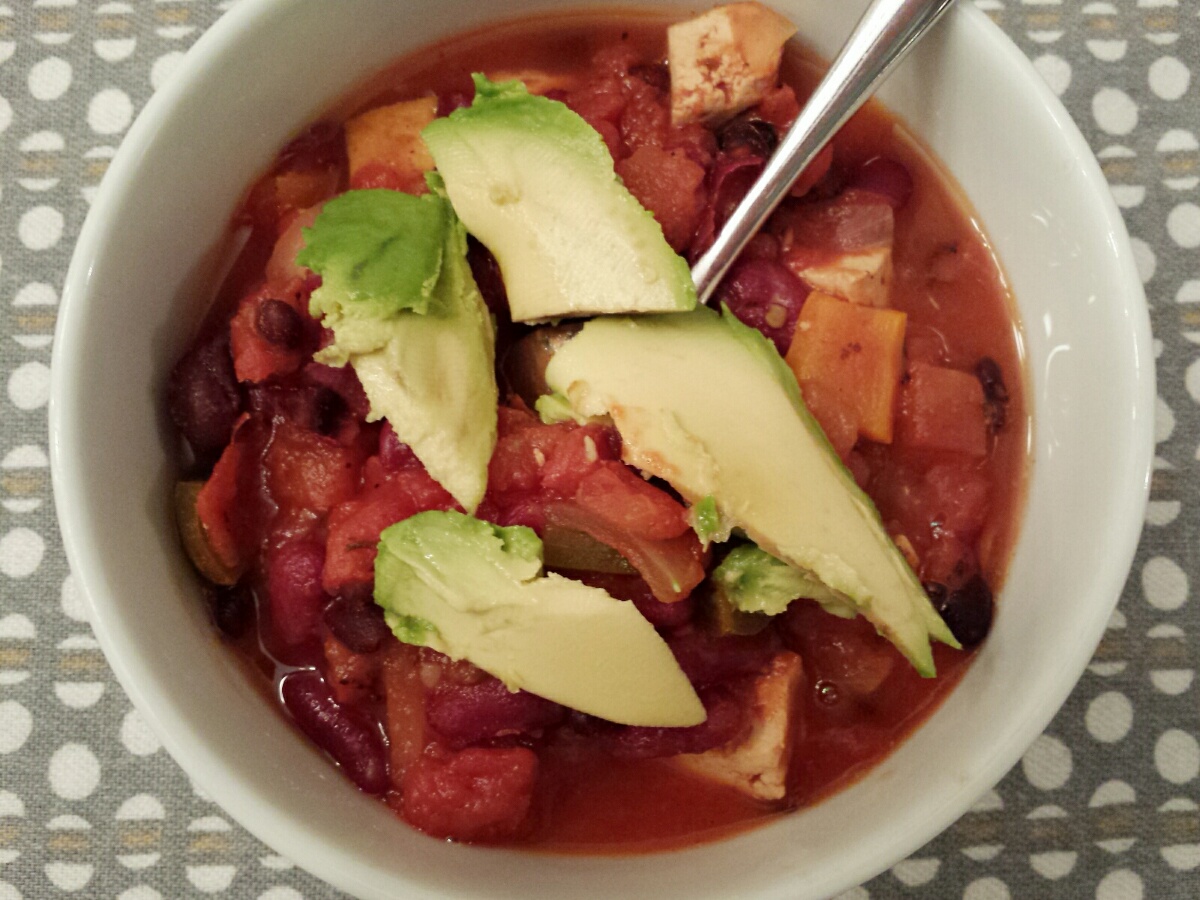 Did you have a favorite Oscar dress or moment? How much snow did you get this weekend? If you make tofu dishes, what's your favorite?
Posted by Lisa at 8:16 PM