After a few fantastic - albeit rainy - days in Amsterdam, we were off to Copenhagen. I was especially looking forward to surrounding ourselves with Scandinavian design and culture, and exploring the city on foot.

On our first day in the city we saw notices on apartment building doors alerting residents about the Copenhagen Half Marathon, which would be run the following weekend. I haven't been able to shake the idea of going back one day to run the race. While there are definitely hills in Copenhagen, for the most part it was pretty flat where we wandered during our few days in the city.

We found Copenhagen to be a fairly easy city to get around on foot and enjoyed the two runs we had time to fit in. Definitely a great way to get our bearings and see the sights. Unfortunately it wasn't until our last night that we stumbled upon another area that would have been great to run - which I'll note below. 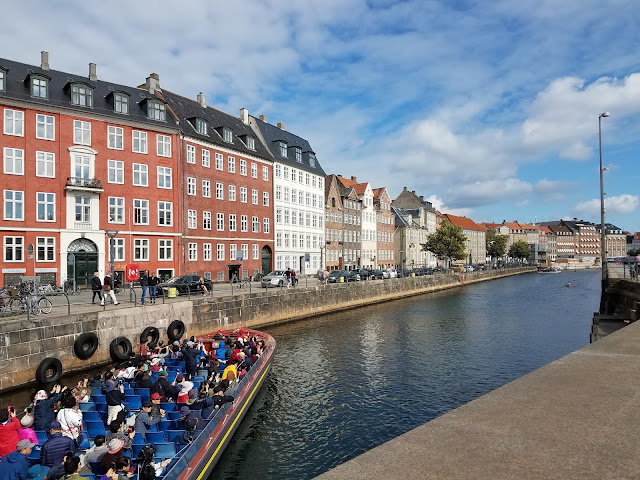 We stayed in a hotel right near the City Hall and Tivoli; an unusual spot for us in that it was a very touristy area, but the benefits were that it was very central, close to the train station and offered a delicious and large breakfast spread that included vegan options.

Our first run combined several parks in the downtown city core, which isn't that difficult because there are a number of parks in Copenhagen. We first dipped into Ørstedsparken, which was right down the road from our hotel and features a large lake with several trails. It was a little oasis in the city. This park is just two blocks from "the lakes", a series of three lakes right on the edge of the downtown core, with a crushed gravel path around the edge. This was a beautiful place to run and is popular for running and walking. Once we got to the north end of the lakes, we took Dag Hammarskjolds Alle to Østre Anlaeg Park where once again, we found several small lakes, crushed gravel paths again and a few actual hills. Another peaceful spot in the middle of Denmark's capitol city. We left this park near the Statens Museum for Kunst, which is catty corner from Kongens Have - the King’s garden - and Rosenberg Slot, a beautiful and impressive palace. We zigzagged our way through the park to see the sights - took a few photos - then exited the garden and ran along Landemaerket and other small streets we thought looked interesting, finally making our way back to City Hall Square. 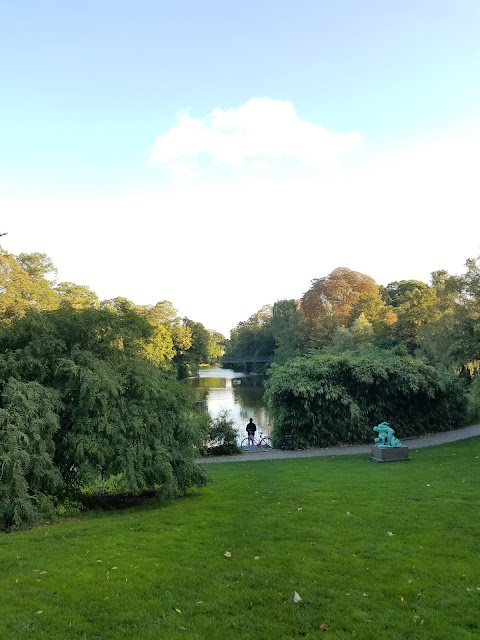 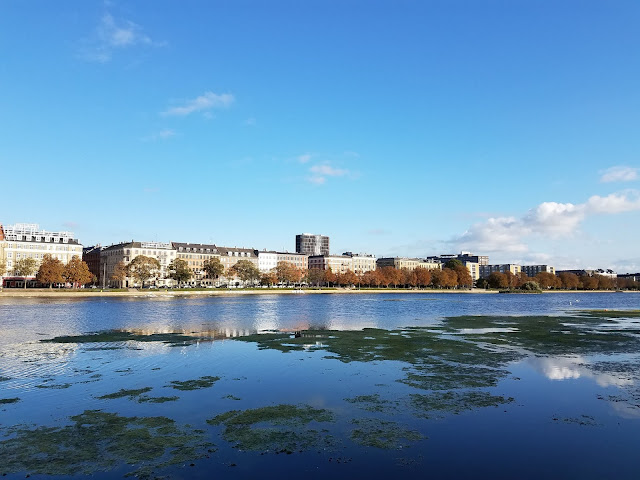 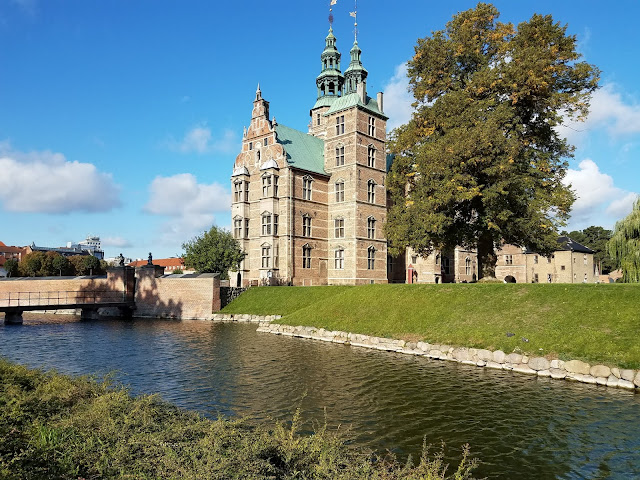 We really enjoyed this run with all the gravel paths, water views and the fact that we're not accustomed to running by a palaces built in the 1600’s. For a run that's easier to navigate, a full turn around the lakes is 6.4K.

We only had time for two runs during our stay in Copenhagen, and our second run took us to a different part of town, and through a few neighborhoods. I had explored Fredericksberg Have a bit on our first day when Matt was taking a tour of the Carlsberg Brewery, and wanted to get back there. There are three roads you can take to or from Fredericksberg Have - Gammel Kongevej to the north, Vestrobrograde to Fredericksberg Allé, or Vestrobrograde the full way. We took a combination there and back, dodging groups of school kids and commuters on bikes. We created a big loop of sorts, through two parks really - Frederiksberg and, to the south, Søndermarken. Through these two parks, you pass by gardens, lakes, the zoo, and, of course, Fredericksberg Castle. 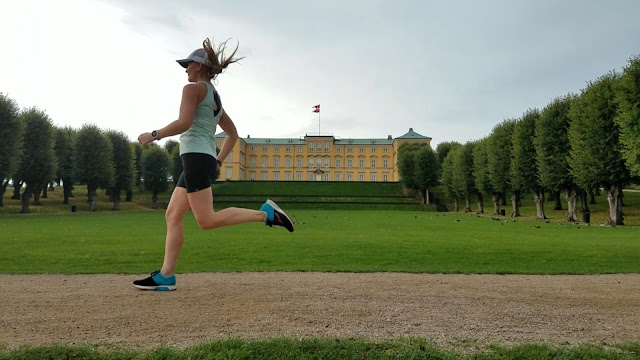 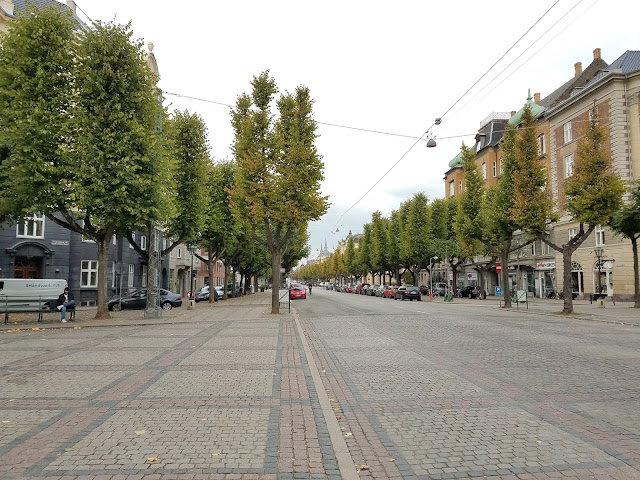 Again, this run was a great mix of both city streets and calm, peaceful parks, with beautiful architecture along the way. We ran back to our hotel along Fredericksberg Allé, which is a beautiful tree lined street and reminds me, a bit, of 5th Ave along Central Park with the wide sidewalks and trees. From what I understand, this road was originally constructed as the King's private road to his new summer home.

Now, our last evening in Copenhagen we were wandering around the city, in an area we hadn't explored yet and came across Kalvabod Bølge - a promenade that runs along the waterfront, specifically designed to bring people closer to the water. The design mimics a wave, and from this wooden structure people can dive into the water for a swim (we saw a few people swimming, a unique afterwork activity), rent a kayak, walk or run along the promenade, or just enjoy some r&r. It is part of the Harbour Circle, a route along the waterfront, on both sides of the river. The full route is 13k, however there are smaller sections of 2, 4, and 7k for those looking for something a bit shorter. 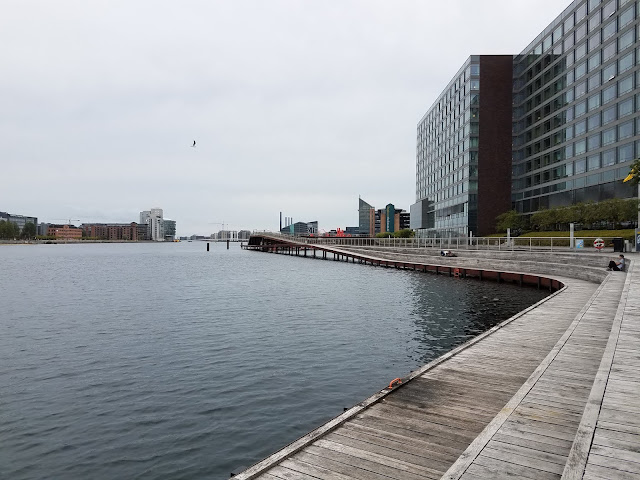 I'm not sure how we didn't notice this area sooner as we had been just down the river a bit from it multiple times. Definitely a place we'd want to go back on a more sunny day.

We really did love our time in Copenhagen and I hope to go back again and explore more of the city and the region in Denmark. While we saw quite a bit over three days, there's so much more to do.

Going to Amsterdam? Read about three great runs to do in the city here.

Labels: running in Copenhagen, running while traveling, travel for runners