As I've said many times before, I love running when we travel. It's a given that I will need a suitcase big enough to carry "regular" clothes but more importantly, my running gear.

On our recent trip abroad, we were able to run in both Amsterdam and Copenhagen. Our stop in Reykjavik was basically a glorified layover and our one full day was spent on a bus tour (waterfalls! glaciers! puffins!) which didn't leave time for a run. And truth be told, the rain and wind wasn’t too inviting, either.

The runs that we did do were informed by friends and research. Because I like to be prepared, research and insights from people who have run in cities I'm not familiar with is really important.

To help you decide where to run if you're heading to Amsterdam, below is a recap of the three runs we did based on the parks we ran to. But it's not all about the parks. If you're staying in central Amsterdam, you'll have to run by or over the beautiful and iconic canals, which makes any run in the city memorable! 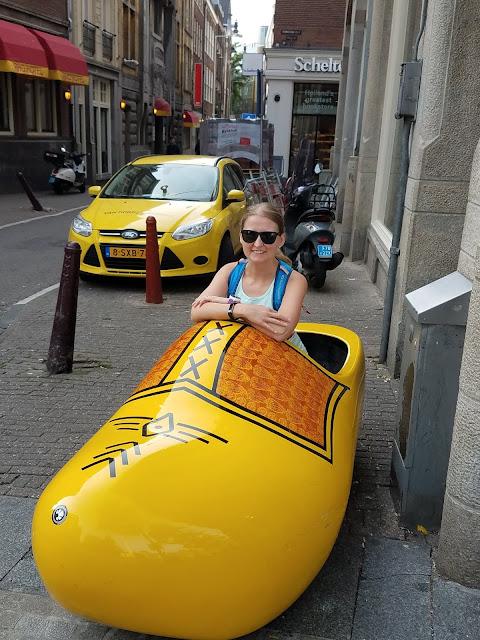 Of course, the exact route you'll take will depend on where you’re staying, but my hope is that this provides some insight that will be help you plan.

Running to, and through, city parks gave our runs some structure but I highly recommend going into each run with an open mind and a willingness to explore. Also, this is a big city, so don’t be surprised if you have to stop for traffic lights and bikes. Wherever you run, you must watch out for the cyclists. There are many of them and even though they all seemed so much more chill than bike commuters in the US, they won't stop. 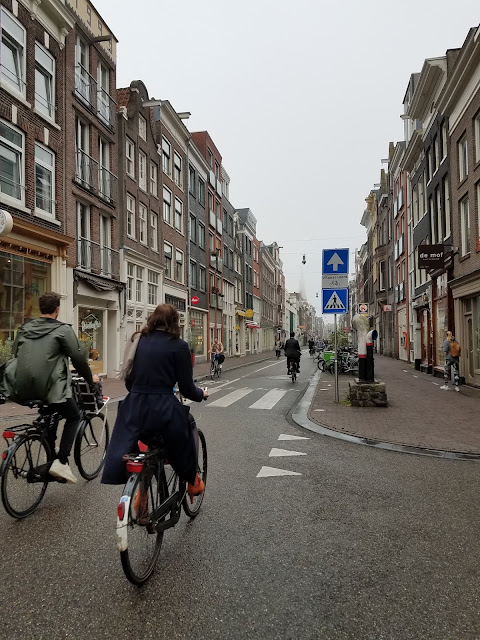 Vondelpark is located in Amsterdam Oud-West, just south west of the canal ring, near Museumplein (Rijksmuseum, Van Gogh Museum, etc.). While one of the largest parks in the city, it also seemed to be quite popular with commuters as there was an endless stream of cyclists on the roads. There were nice gravel paths along the outer edge and crisscrossing through the park, which we were thankful for after walking on the city’s cobblestone streets. We particularly liked the ponds within the park and the grand houses and buildings along the outside. It's a beautiful park that's easy to navigate and with all the paths, you can really explore. 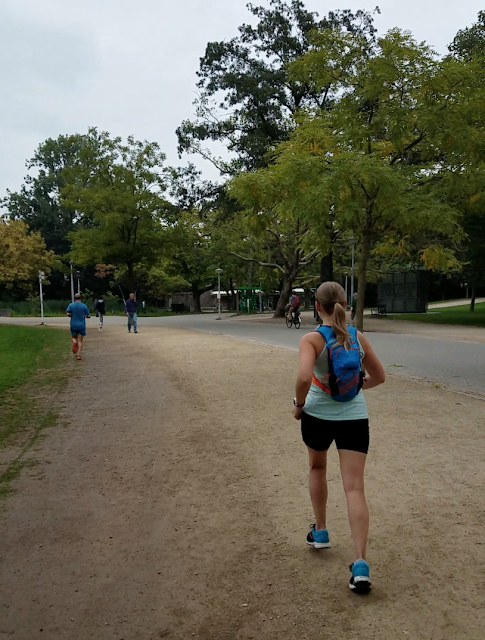 From our Airbnb near Neumarkt, we took a winding combination of small streets to the park, crossing over Leidseplein bridge to get there. If you're looking for an Asics store, there's one right near the park. Leaving the park, we ran along a canal and into de Nine Strasse (The 9 little streets) where we found a cute little cafe for breakfast. We likely could have taken a more direct route to the park, but it was our first morning in the city and were still getting our bearings. Plus, it's fun to get lost along the way! 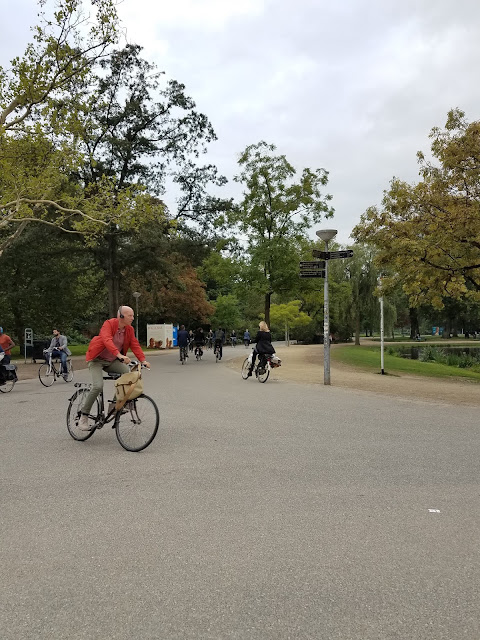 On the north west side of the canal ring, Westerpark is northwest of Amsterdam Central Station, in the Jordaan. The size of the park looked different depending on the map we were looking at, but as we ran it, we found it to be quite substantial. Again, popular with bike commuters, this is a long and narrow park with a road going through the center and a running/walking path alongside. A section of the path is along a marshy area and small canal, with cute little cabins on the other side. From what I learned from a friend, the cabins are likely vacation homes, rather than full-time. Either way, even for Amsterdam they seem super unique!

The trail is paved and in really good condition. I appreciated the separate trail from the cyclists, but we did run along the wider path on the way back for a different view. It was 99% humidity that morning after the rain (so much rain), so our photos are a bit gray and hazy! 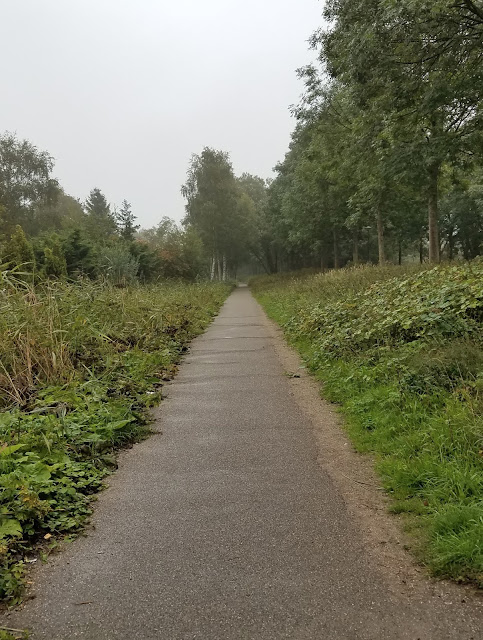 We got to this park by running up Zeedijk, across on Prins Hendrikkade, which goes over a few canals, and then taking Haarlemmerstraat straight to the park. This was essentially an out and back run; we got coffee and pastries from Brood on Zeedijk for breakfast (amazing pastries, very hot coffee). There are quite a number of bakeries and cafes along Haarlemstrasse that smelled amazing, as well. 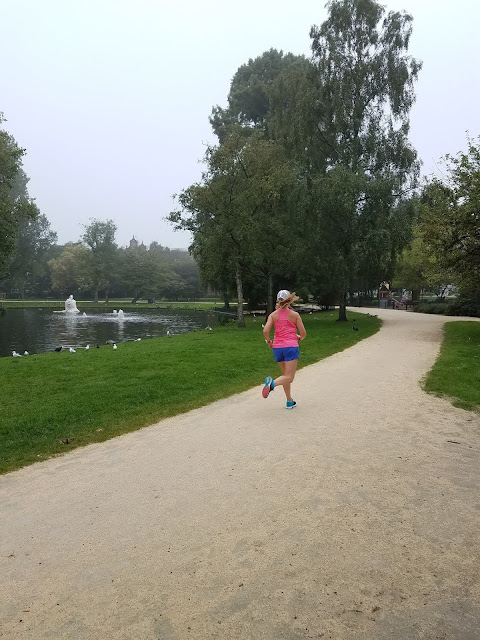 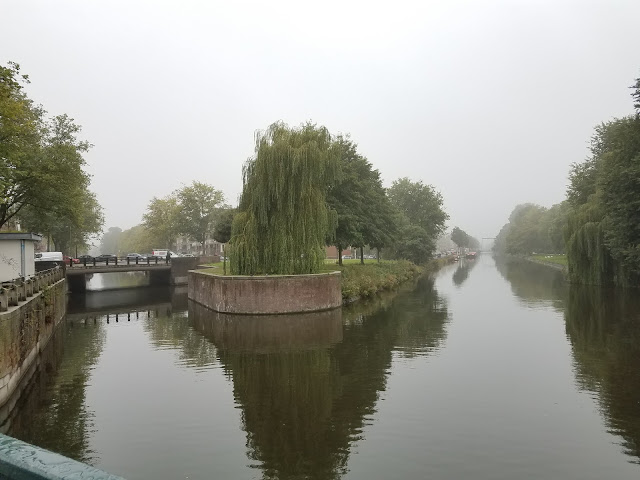 Oosterpark is in Amsterdam-Oost, southeast of the canal ring. This run was a great way to explore a part of the city we hadn’t spent much time in yet. This park is smaller than Vondelpark but is a strong competitor in terms of beauty. The lake is beautiful, there’s a nice loop around the park and some paths that split off. It was also busy but a little less so with commuters than the other parks, it seemed. 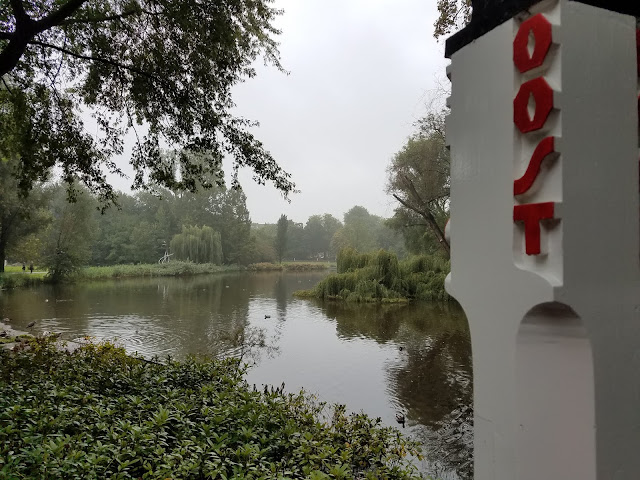 To get here, we ran down Jodenbreestraat to Plantage Middenlaan running by the Opera House and alongside the zoo, and into the park. For this one as well, we did a semi-out and back route and finished - once again - back at Brood to take breakfast with us to the apartment. (It's true, on this trip we didn't follow a strict vegan diet like usual, but were thrilled to find quite a number of vegan restaurants.)

Now, this is gorgeous, isn't it? All of these parks were unique and perfect for our runs! 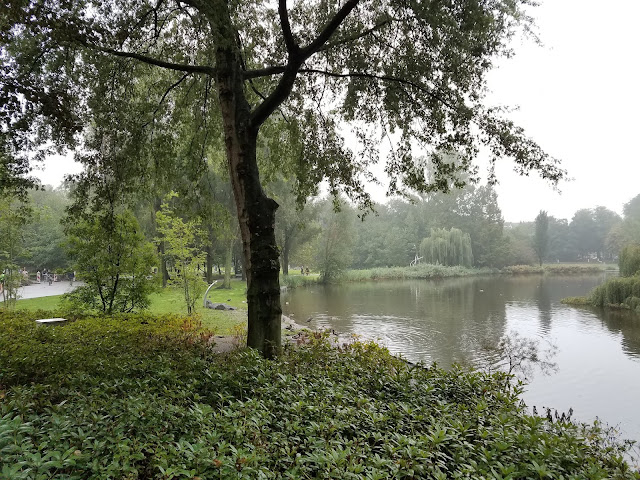 For a long run...
A friend of mine also suggested the Amsterdam Bos, or the Amsterdam Forest, which is a bit farther out but apparently great for long runs if you find yourself in the city while marathon training. I can’t vouch for this park, but I certainly trust the source.

Disclaimer...
Since we are not locals and only visited for a few days, we don’t know all the places to run and I’m actually certain that there are a lot of other great places to go - some may be better than those here. But what I can say is that we found these enjoyable and saw a number of other runners covering similar routes. If your heart is set on finding the one best place to run, first, you probably won’t find it because every runner will have a different opinion but you can try contacting a local running store or running group for suggestions from locals. I won’t be offended.

Have you run in Amsterdam? Tell us about it!
Posted by Lisa at 9:24 PM