Review: “Is Everyone Hanging Out Without Me? (And other concerns)”

I finished reading this book a bit ago but am just now getting around to writing about it. This is not because I didn’t like the book – the exact opposite is true – or that I don’t recommend it – again, the exact opposite – but just because it seems I’ve been lazy.

Truth be told I debated between this book and Tina Fey’s book early last year. I went with Tina’s book but for some reason I just couldn’t get into it like I thought I would (I do love Tina and was thrilled when she was announced as co-host of the Golden Globes) and it’s sitting unfinished in my Kindle library.

This book, Is Everyone Hanging Out Without Me? (And other concerns) kept me entertained through countless subway rides to and from work. It could easily be read in full during a lazy weekend but given I only had about 10-15 minutes here and there it took me a bit longer. Mindy Kaling delves into her childhood years growing up near Boston as the only daughter (she has an older brother) of immigrant parents who put great value on education but supported her non-traditional career choice. We go with her to college, Brooklyn and eventually to LA where she became a writer for, and actor on, The Office.

Mindy is hilarious, quirky, tells-it-like-it-is, and half way through you just want to be her friend. She seems like a cool girl you want to hang out with. She’s normal. And she’s not afraid to write about really odd things in a book that’s out there for the entire world to read!

Plus, there’s a whole chapter titled “Revenge Fantasies While Jogging” which I think just about any runner can relate to. Maybe not the revenge part, but definitely the fantasies part. I mean, who among us hasn’t spent a solo long run dreaming about some situation in life?

Bottom line: this is a great book and I definitely recommend it to anyone looking for a lighthearted, laugh inducing, sometimes cringe-worthy, and insightful read. And I should mention, I’m probably one of the few people in this country who has not been a devoted fan of The Office since it debuted, but you don’t have to be a fan of that show, or The Mindy Project to be a fan of this book. 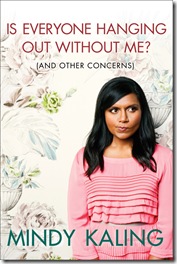 I've never seen The Office either but I love The Mindy Project so I definitely want to read this!

This sounds really fun! I didn't realize she had a book, but I may add this to my list now.

I love her and her show. She's a real girl who says what's on her mind. Can't wait to read the book.