Why This Time is Different

Yesterday I had a follow up appointment with the Sports Doc. My leg has been feeling much better the last few days than it did last week, but I know I’m not 100% yet. Going in, I anticipated that she’d tell me I have a few more days left on the crutches. I was trying my best to be prepared.

After Sports Doc checked my leg and asked how I was doing, we took a look at my MRI. Originally she had just given me a call with the results so I didn’t have to make another trip into the office, which meant I hadn’t actually seen the pictures. On an MRI, solid bone appears black, while soft/injured bone ‘lights up’ the image, appearing white. There was one bright spot near the area that hurts and another area close to my knee. She had mentioned this on the phone but I haven’t felt anything odd near my knee so we didn’t worry about it since I was staying off my leg anyway. While her physical examination didn’t reveal anything new and I am improving, I am to stay on the crutches for another week then try short distances without them. Deal is, Woody and I are going to Denver next Friday, which means the annoying things are coming with me.

So, what is this time different from? It’s different from the last time I had a stress fracture, which was only about six months ago. Same leg. Some of you probably remember this episode.

Why is this time different? Because I am able to wrap my mind around it. Last time I was training for my first destination race, during which I was going to celebrate my 30th Birthday. The pain was a dull ache that came on slowly and I had convinced myself it was muscular because I didn’t want to think otherwise. In the end, we cancelled the trip and I also had to downgrade my registration for the See Jane Run Half Marathon to the 5K in Seattle. I had my heart set on running 3 half marathons this year and that dream was dashed with a simple MRI. I bet you can understand what that felt like.

This time, it hurt so bad I could hardly stand. I knew right away that whatever happened was not good. This time the tears rolled because of physical pain rather than the pain of not being able to run. At least I finished the race this time. I realize this is a sign that as much as I want to run half marathons and event marathons, for some reason it’s not meant to be for me. Apparently while running can make your bones strong, in my case as someone with osteopenia, it’s stopping me in my tracks.

Long distance running is no longer in the cards for me. As much as I hate it, I have come to terms with the fact that I need to stick to shorter distances. Sports Doc and I talked about this and she doesn’t want me to stop running but she does want me to stick to lower mileage. Maybe next year my goal will be to get a new PR in the 4 and 5 mile. I’m only 30, I have many years left in me. Maybe I won’t run a half next year, or even the next, but maybe a few years from now. I am not happy about it, but this is my reality. This time I’m thinking logically about the situation and not letting my emotions rule. If I’m smart about this now, there’s still potential in my future.

I just hope you’ll stay with me even though I won’t be training for any big races in the near future. I’ll do my best to keep things interesting around here!

Until I can run again, this will be in my dreams…. 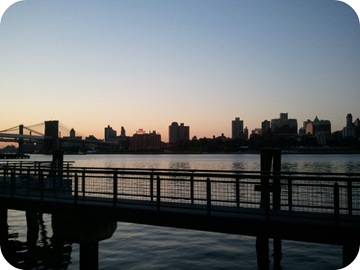 I admire you so much. You are being so brave through all these Cushings Disease encroachments on your life. Love you, daughter.

We do all live and learn, which is a good thing. I wouldn't write off long distance just yet. Maybe take a year or two for shorter things and to build a great base, and then try again. Just my two cents!

I do agree with you. I love the challenge of the half marathon too much to give up right now. Hopefully a few years from now I'll be able to do it!

Aw, thanks. But even though this is all pretty inconvenient, I still am a lot better off than a lot of people.

That is such a great attitude to have. Face the reality of WHAT IS NOW, and deal and adjust as necessary. You may find that 5 km or 8km events are great, too.

Enjoy what you CAN do instead of worrying about what you cannot do.

Good for you! And I am glad you are following your doc's orders, too. :)

You have such an inspirational attitude. It sounds like your goals are perfectly realistic and setting PR's is fun!!

Good for you for listening in to your body. We all should trust our bodies more than we do...