Book Review: "How Did I Get Here?"

I picked this book up on a whim when I was at the library a couple weeks ago. It was on the 'new books' rack and didn't know what to expect but thought it sounded interesting and like it would be an easy read while in Florida. Turns out, I was pretty right.

"How Did I Get Here?: The Ascent of an Unlikely CEO" by Tony Hawk is not an autobiography. It's really a collection of tips, stories and anecdotes written by Hawk with the help of his sister, Pat. While you've probably never thought about it, I'm guessing you wouldn't think of me as a skateboarder. And you'd be right. I don't skateboard, I've never even been on one. Truthfully, I didn't even know all that much about Hawk other than he's one of the most well-known skateboarders. What drew me to this book is the combination of marketing, business, and sport.

I learned a few interesting things about Hawk, like the fact that he turned pro while in high school, he's an early adopter of technology, and he gives back to communities around the country through his non-profit organization, the Tony Hawk Foundation. His parents, Frank and Nancy, founded the California Amateur Skateboard League, and a great deal of his family is involved in one or more of his businesses. Since he (along with Per Welinder) started the first business, Birdhouse Skateboards (still running today), Hawk has expanded Tony Hawk, Inc to include a film studio, a Sirius/XM radio show, clothing lines, numerous skate tours, websites and much more. Through the years, he has developed a strong brand and oversees that brands use in numerous licensing deals. He has over 2.2million (yes, you read that right) followers on Twitter and holds an annual Easter Hunt via Twitter clues that send kids and adults alike on treasure hunts around the world. While not all his ventures have gotten off the ground, he has built a pretty incredible empire.

While his success is impressive (especially since it's all because he can ride a skateboard) and I did learn few things, the book itself isn't that great. It jumps around a lot and I also found it to be a bit repetitive. There were some sections that didn't seem to fit in with the rest of the book, but perhaps they were intended to appeal to skateboarders.

Overall, I'm glad I read it because it did teach me about an industry I knew nothing about. It was a quick read and humorous at times, so I don't feel like it was a waste of time. If you're interested in marketing and sports, you may like this book. If you're a fan of Tony Hawk's and interested in marketing and sports, you should definitely pick this up. If nothing else, I now have a new, and improved, opinion of skateboarders! 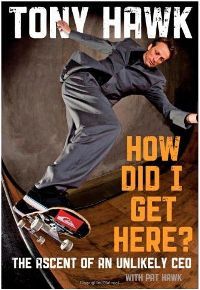 Click HERE for more info
************
My workout this morning was not that great. While I did manage to pull out a 4.5 mile run on the Woodway and some strength training and stretching, the combination of it being the 7th workout in a row, tight hamstrings, and a lack of sleep was not a good one. I went to an incredibly productive NYRR Young Professionals Committee meeting last night and was so energized by all the great events we're planning for ths Spring (I can't wait to share them with you!) that I had to start working on my to-do lists when I got home. Unfortunately, that wasn't so good for my sleep. Tonight  I'm going to sleep earlier and we're taking tomorrow morning off from the gym, which is conveniently planned to coincide with the overnight snow storm we're going to get!
************
Today's workout -
4.5mile run
3x12 hammer curls
3x10 overhead tricep extensions
3x10 lateral arm raise
Posted by Lisa at 5:23 AM

Wonder how you and Woody are doing with 15 more inches of snow with more coming. I bet Florida trip helped with snow boredom . Having to deal with snow in the City is different than me sitting here looking out at a snowy back yard with the birds flocking to the feeder and 2 big rabbits bouncing around.