Book Review: "My Life On the Run"

This book, by the "Mayor of Running" Bart Yasso, is a collection of stories. Not just stories, but tales of running adventures that the majority of us will never have the opportunity to experience ourselves.

The Chief Running Officer of Runner's World has been working for the magazine since 1987 after a rocky start to adulthood. He's run over 1000 races, including marathons on Antarctica and in the Arctic. He battled his first bout of Lyme's disease on Mount Kilimanjaro and faced charging rhinos in India. But he's more than just a runner and he's done more than just ride his bike cross country, solo. Through his entertaining stories he shows that he loves the sport of running so much that he will do anything to promote it. He will do anything to get people running, to help them achieve their PRs. He has learned through his struggles that every run is precious and shouldn't be taken for granted. I can't imagine how he was able to pick just these stories out of the countless he must have stored away in his memory. What I can say though, is that I'm extremely grateful that he has shared them.

Before reading this book I admit, I didn't know much more about Bart Yasso than the fact that he worked for Runner's World and that the Yasso 800 (which I have yet to try) is his invention. But, I heard this was a good book and I am a loyal follower of RW so I wanted to check it out. Reading this on the subway was the best way to spend rush hour. I was literally disappointed when I finished the book because I wanted to read more.

If you love running and/or adventure stories, chances are pretty high that you're going to love this book. And as a bonus, after the stories are done Yasso lists his favorite races and lays out training plans for newbies, seasoned runners and hard-core runners for 5-K, 10-K, half and full marathons. And of course, he explains the background of the Yasso 800's and how to do them.

Bart Yasso is able to dictate what running is, what running means, and what running does to us better than anyone else I've known. he puts running into words more elegantly than I ever could, so I'll leave you with this:


"Running celebrates our commonality. Are we human because we can run on two feet, or does running make us human? I know I feel more like myself when I run, even if it's only a few miles, or at least I feel like the self I like best. Running inspires creativity, relieves stress, and gives us insight into ourselves and the world, making the human condition more tolerable."

Next time you lace up your sneakers for a run, get on your bike, or hike a mountain, relish in the possibilities and the adventure that awaits you! 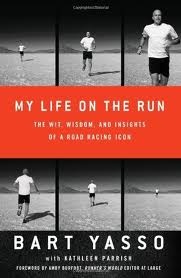 Great review! Thanks for sharing!

Seems the book is good, I'm going to read that too. Thanks for the good review.

Katie @ Health for the Whole Self said...

Can't wait to check out this book! I love the idea of seeing every run as an adventure, as a door for possibility. :)

I have been wanting to read this book for so long!!

I can't wait to read this book, thanks for the suggestion!

i did yassos this am. i'm not convinced because they're hard on the treamill and i need to find a place to do 800s? but we shall see, right?

Interesting. I love Runner's World and I've never really read a hard-core running book so maybe I'll check this one out. And yes, I signed up for Governor's island. Can't wait to meet!

Hi, nice to discover your blog! I was just checking out reviews of this book because I recently read it and wrote about it, too, along with a Q&A with Bart. http://www.therunnerstrip.com/2011/01/interview-with-bart-yasso/ I love the quote above you reprinted; he sure has a lot of quotable quotes. Keep up the running!