I recently finished reading Meb Keflezighi's autobiography and was overcome by his inspirational story. Admittedly, when I opened the book I didn't know much about Meb beyond the fact that in 2009 he was the first American to win the ING New York City Marathon since 1982. While I love to run, I haven't actively sought out a lot of information on elite runners until recently and I was curious to learn about this great runner.

Meb's story is pretty incredible. He and his family really embody the 'American Dream' we've all grown up hearing about. He was born in Eritrea, a country in north east Africa that fought for independence for generations. After years trying, Meb and his family finally made it to America and settled in San Diego when he was 12 years old. His father was the only one in the family who could speak English.

Running came into Meb's life when he was in junior high and had to run a mile in PE. He's competitive by nature and his parents had instilled in him and his siblings from an early age that they were to do everything to their best ability. Needless to say, his life was never the same after that day. His love of running has taken him far and brought great things to him, his family and the Eritrean-American community. He began winning championships in junior high and high school, moving on to UCLA and then USATF, the Olympics and of course, the ING NYC Marathon. His faith and family connections have helped him through the tough times and given him strength to succeed.

The book is in Meb's voice, but was co-written with Dick Patrick. It was a pretty quick read and gives a great look into the life of an elite runner; I learned quite a bit about the industry and found it really interesting. Meb's faith is incredibly important to him and is a large focus throughout the book. Perhaps that also had something to do with the publisher of his book being Tyndale (a publishing house focused on Christian works). All in all, it was a really good book and I highly recommend it for any runner (hint, hint: still looking for a holiday for that runner in your life?). 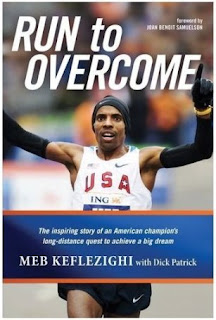 Click HERE for more information
************
today's workout -
(short workout today; the gym opened late this morning so I had to cut my workout by a few minutes and opted to maintain my cardio time)
50min/5.75mi elliptical
foam roller
stretching
Posted by Lisa at 5:31 AM

I think I might check out that book. I have heard a lot of buzz about it lately in the blogging community.

Hoping Santa brings me one!

Glad to hear you enjoyed it! The signed copy I picked up at RnR Las Vegas earlier this month is sitting on my desk just waiting to be read. I can't wait to dive into it!

I met Meb in November. He came to the local running shop to sign his book and talk to us. See attached blog post - a very down to earth guy! I'm still reading it. It is an easy read but been reading blogs instead! LOL